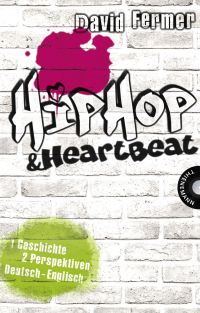 Today, I´m talking to you about a book. The title of my book is HipHop & Heartbeat. The book was published by Thienemann Verlag in 2012. It has 190 pages. The recommended reading is twelve. The writer is David Fermer.

David Fermer was born in 1973 in Luzern. His parents are from England. When he was four years old he returned to England with his parents. After his school attendance he studied “Art & Design” and then “Film and Video” in London. In the middle of his “Film & Video” study he moved to Berlin, where he finished it. After his study he worked as a production manager and an executive producer. But work wasn´t all fun for him. He was forgetful and unorganised. He didn´t like the stories of the films and always thought that he could write the stories better. But he didn´t try to write stories by himself. After some time, he started to write a book. The only problem was, he needed money. He got a job as a teacher in Peru. After a year, he went back to Berlin, because Peru wasn´t his dream place. He worked part-time as a teacher. In his free time he was writing and translating. In 2003, he went to Cologne and got married there. He started writing full-time because no one gave him a job as a teacher. Today he is writing books in two languages: German and English.

What is so special about this book? The chapters alternate between German and English. I tell you more about it in my opinion about the book.

Now I will tell you something about the storyline.

Carl is a German boy. Carl and his friends are the best rappers at school. But Carl is very afraid of battles because he thinks that no word will come over his lips when starts to rap. At the school concert the friends want to perform their new songs. But during a rehearsal his stepfather Falk and his headmistress Mrs. Röhm burst into the rehearsal-room at school. They forbid Carl to make music because his grades are pour. He can make music again if his grades improve on his next test. Finally, Falk and his mother are paying a lot of money for a language holiday to London.  But the test will be after the school concert! What should he do?

Two days later, Carl flies to London. Mr and Mrs Bridgewater are Carl´s hosts. They pick him up from the airport. At first, their son Oliver isn´t friendly to him. At home Carl unpacks his suitcase. But what is that? These aren´t his clothes and things. He sees the clothes of a girl and other girlish things. What a disaster! Excited, he looks for signs of the owner. He finds an invitation for a party in the Camden Youth Centre. He decides to go there and bring the suitcase to the girl called Toni.

Toni´s father is a busy man. He always works in Paris and his daughter is alone at home with a nanny in London. Often she goes to a second-hand record shop called Vinyl Only. Once when she goes to the record shop a man with a brown coat is watching at her. When she goes home the man is following her. She is very scared. Is it a kidnapper? Or is it a bodyguard who is working for her father. She asks her father when she flies to Paris for a weekend together. But he hadn´t hired a bodyguard to look after her. But he instructs two bodyguards when she is attacked by two men again. One of them is the man with the brown coat. Toni is feeling like in prison and outfoxes her bodyguards to go to the youth club.

At the party in the Youth Centre Carl meets Toni. They dance and talk together. Carl finds out that Toni is the daughter of AnoNim. AnoNim is a famous hip-hop star and an idol of Carl. When Carl brings Toni to the taxi stop they are attacked by the two men. They take Toni and Carl is left unconscious.

Carl moves heaven and earth to find Toni. Together with Oliver, who changed his opinion about Carl and the Germans, Mr Bridgewater and a homeless woman he succeeds to rescue Toni. And in the end all are very happy. Carl gets his own suitcase and meets his idol AnoNim and AnoNim has more time for his daughter Toni.

But the best is the school concert, because there is a big surprise for Carl.

My opinion about this book is very good. I like it. It´s quite easy to read because there are only short chapters. English and German chapter are alternate, so you have different degrees of difficulty. In the German chapters, only the conversations between Carl and English peoples are in English. In English chapters, all text is English. Difficult words are marked and explained in German at the bottom of the page. The story is exciting too. Sometimes you have a presentiment of what will happen next. But it doesn´t matter. You can easily learn English. And the best is: You can download the English chapters as an audio file. So you can learn it by another way. David Fermer published some other books in the same way.